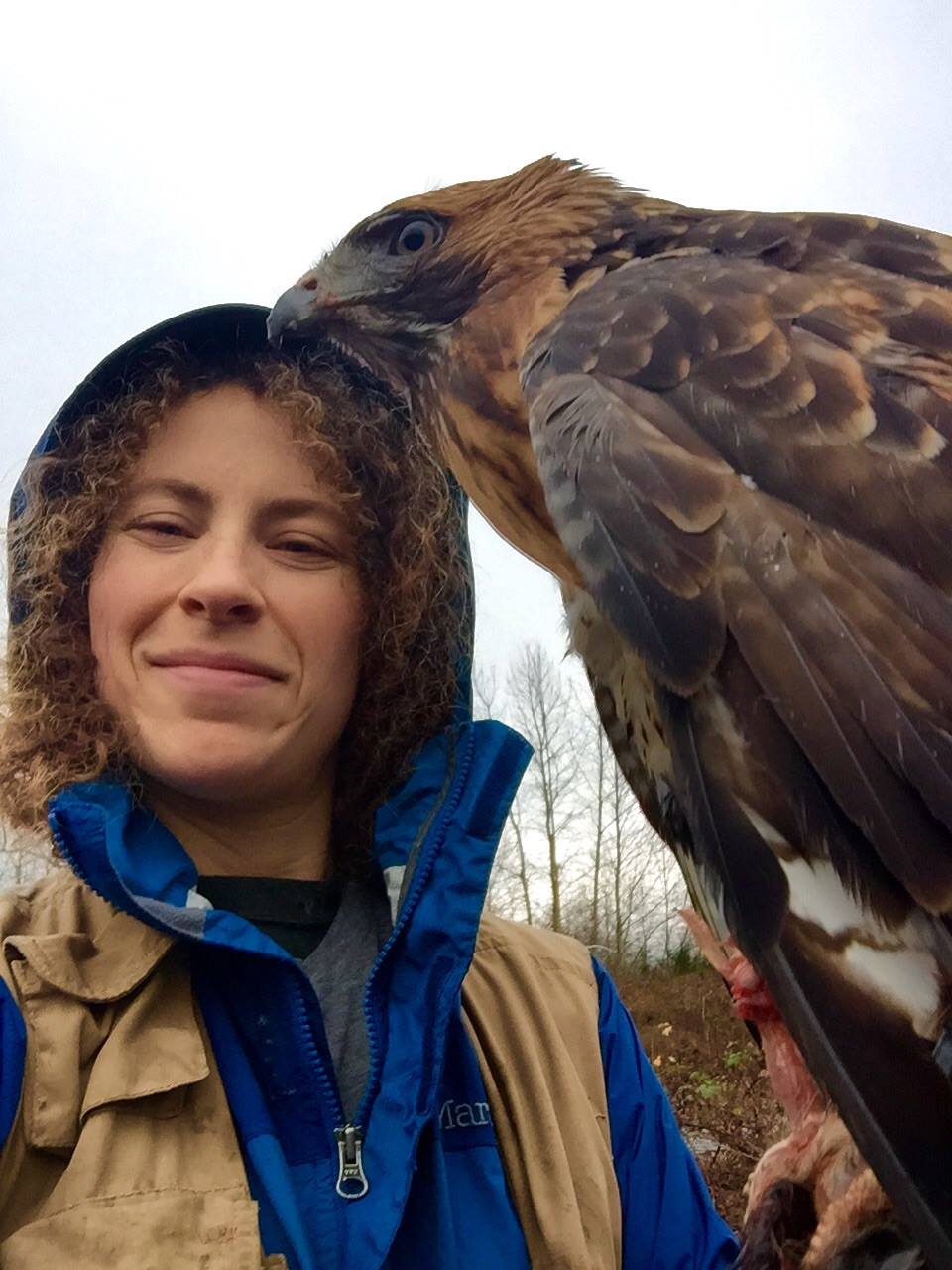 My interest in birds, particularly raptors, started at a young age. A friend of the family was a volunteer for a local raptor research organization and took me out on various trips to band red-tailed hawks and young American kestrels. When I was 12 years old I was looking for information about raptors on the internet and came across a falconry website. Intrigued, I asked the family friend for more information. He told me, “Don’t become a falconer, it will take over your life.” Even so, the friend of the family eventually introduced me to my falconry sponsor and the rest is history. Now twenty-four years later falconry is definitely my whole life.

Falconry is one of the most highly regulated field spots. Multiple state and federal laws protect birds of prey and we follow hunting seasons that mostly match many gun hunting seasons. To acquire a falconry license you must a) find a sponsor b) pass a test and c) pass a facility inspection. Only then will you be allowed to get your license and work with a bird. The falconry regulations vary state to state but all follow guidelines drafted often with the help of falconers themselves. The first two years of your falconry career are considered your Apprenticeship. After two years if your sponsor signs off, you can move to General falconry level. This often broadens the type and numbers of birds you can work with. After five years as a General falconer you can apply for your Master falconry license. This is the highest license type, though there are some additions to this license such as obtaining an Eagle license in addition to your Master permit. 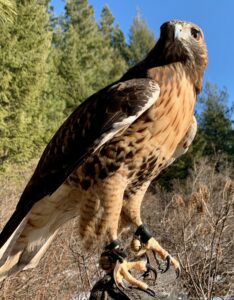 The most common questions people ask are, “How do you get them to come back?” Or “How do you train them?” For me, successfully training a falconry raptor is really about learning the deep intricacies of raptor behavior and biology. There is a lot more to falconry than just hunting with a bird in my opinion, though that is and should absolutely be the goal of falconry. To have a good working relationship with your bird you must have excellent handling skills as well as trust from your bird. The birds must be healthy mentally and physically, in good feather and should always come first.

You can ask 100 falconers their opinions on training and get 101 answers, but the fact is that raptors are very food motivated and this is how you build your relationship with them. The first steps are to get the bird to hop to your glove for a piece of food, then fly a short distance and then fly a longer and longer distance. We will then also introduce the lure. The lure is usually a piece of leather often made to look like the bird’s quarry and is attached to a line. Food is placed on the lure and the bird chases and gets the food reward for catching it. Once the bird is flying long distances to you and the lure it’s time to go hunting! Most falconers will start with a red-tailed hawk as their first bird as they are a hardy species and very common in most states. The most important goal with that first bird (and all of your birds) is to successfully hunt with it in the field.

Few things are as ancient and wild (and ultimately out of our control) these days as watching a wild predator take wild prey. And so, falconry teaches immense patience. When I am out with my raptors, everything else fades to background noise. I am able to truly catch glimpses of what it is like to be a wild predator chasing wild prey. 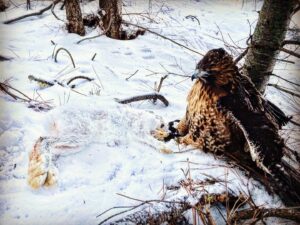 In a world that is often organized, arranged, scheduled and anticipated, falconry is quite the opposite. Ultimately you have no control over what happens next. The bird is free to fly away; the quarry makes its own decisions. You are a spectator to something truly timeless and wild. Hunting with a raptor also teaches you a great deal about the body language of both predator and prey. In the case of the rabbits and hares I hunt, you must learn their natural history, especially habitat and foraging preferences. I have the utmost respect for my quarry- I have seen them use some amazing evasion tactics under immense pressure from both an aerial and ground predator at the same time and yet they almost always keep their cool. Getting to see these interactions is the most rewarding part about a successful falconry experience.

I urge anyone who is interested in falconry to read as much as you can and join your local club. However, the absolute best way to determine if you think falconry is right for you is to go out hunting with a falconer multiple times, not just once or twice. I went hunting every weekend with my sponsor for two years before I took my falconry test. It really is a lifestyle and not a hobby or passing amusement. Those of us who devote our lives to falconry get to experience that rare relationship of working with a wild animal. Though falconry has absolutely taken over my life, I wouldn’t change that for the world.